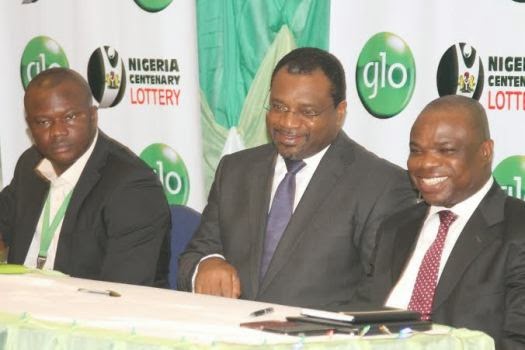 In continuation of the activities marking the country’s celebration of one hundred years as a nation, Nigerians have been given a golden opportunity to win fantastic prizes including 24 Hyundai Jeeps and one hundred million naira grand prize in the Centenary Lottery organized by Secure Electronic Technology Plc and powered by Globacom. Continue...


Addressing newsmen at the launch of a special Nigeria Centenary Lottery Television Commercial sponsored by Globacom in support of the promotion in Abuja, the company’s Business Director,Mr. Kemi Kaka, said the lottery was organized to give back to the society in a spectacular way.
He said Globacom as a truly Nigerian company was irrevocably committed to uplifting Nigerians and empowering them in an unlimited manner, especially in the mood of the Centenary Celebrations. 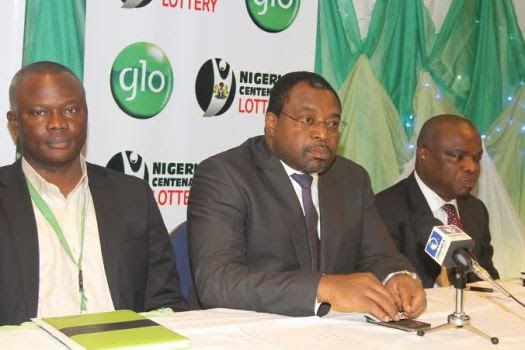 The organisers said the grand prize winner of N100 Million will emerge at the end of the promo on 2nd September  2014. ‎In a presentation on the promotion's mechanics, Mr. Godwin Orianzonwan of Globacom's Value Added Services Unit said Nigerians willing to maximise the opportunity of the promo to enrich their lives should text WC or CWC to a shortcode: 35777. He said each sms costs N100.


Speaking earlier, the representative of the Secretary to the Government of the Federation and Senior Special Assistant to the President on Research and Documentation, Architect Ferdinand Agu reiterated the importance of the Centenary Lottery as a way of generating revenue to assist government in making life better for Nigerians in all ramifications.

He commended Globacom for joining hands with the federal government to give Nigerians a worthy centenary celebrations. 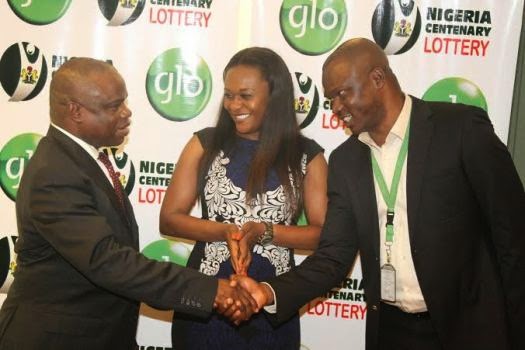 Also speaking, the Director General, National Lottery Regulatory Commission, Dr. Adolphus Ekpe commended the centenary lottery which he described as a win-win platform for Nigerians. He urged participants not to hesitate to flag any issue to the Commission, promising to promptly tackle such issue in the best interests of the people.

Mrs Leticia Otomewo who represented SET Plc said the second phase of the promo has been further enhanced to give Nigerians more opportunities to win bigger and better prizes during the promo. She said that during the first phase, many winners won various prizes, including cars and their lives have been transformed forever.  She said proceeds from the promo will be handed to the Centenary Anniversary Trust Fund for projects that will benefit Nigerians.
Posted by Chimah Ikechukwu at 3:09 PM