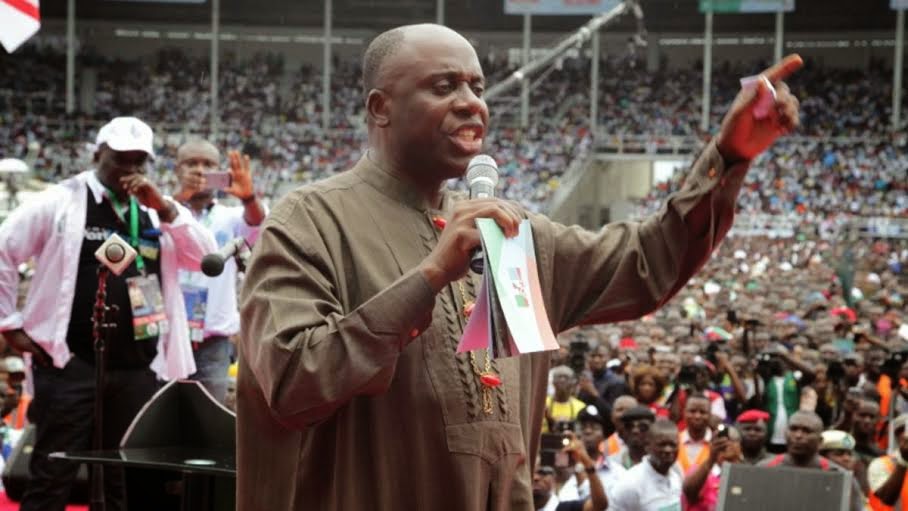 While campaigning for APC at the Degema Obonoma and Abonnema communities in Degema and Akuku-Toru Local government area of Rivers state yesterday March 3rd, Gov Rotimi Amaechi was quoted as saying to the people to vote for their stomach and not because their brother, President Jonathan was in the race to be re-elected as President.


"This election is not about brother, it is about your stomach. If dollar likes, it can get to N300 or N400 to a dollar, the President can afford it but you can’t afford it. Now they tried everything possible to stop the dollar from losing control. They couldn’t because the economy will determine whether the dollar will lose control or not and the economy has done that already. Another one is fuel. They have done everything possible to pay for fuel. They can’t pay. The money is not there. Now, there is fuel crisis.
If they win, they will abandon you completely because they have no solution to the problems. The first solution to the problems is a new government. Are we going to win? The answer is yes. We have not started campaign. We will start campaign by the end of this week. We will see the crowd again that will frighten the president. Nigerians want change. Things have got to change. See your road. Two years ago, I sat with the president and Kalabari chiefs and I said, ‘Allow me take this road. The president said no’. You can see the road. Next rainy season, you cannot drive into this place unless you change the President and if you change the President, then the new President can fix the road.” he was quoted by Vanguard as saying

Posted by Chimah Ikechukwu at 4:31 PM