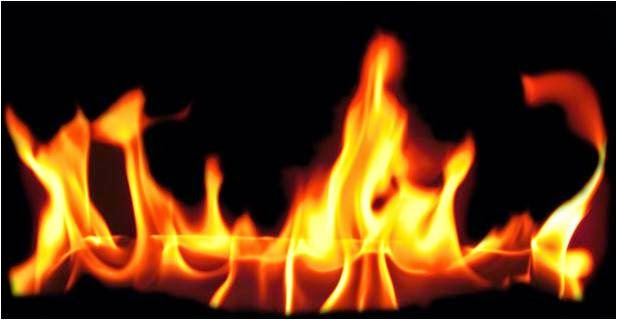 According to The Nation, while being paraded to reporters, the 36 year old woman claimed that she had a disagreement with her husband over his alleged nonchalant attitude to her failure to conceive since their marriage over three years ago. She denied setting her husband on fire for refusing to take her out on the Valentine’s Day which happened to be her birthday.

Bukola said she didn’t know how the attack happened.

The incident happened at the couple’s residence in Idolofin area of Odo-Ado, Ado-Ekiti.

Bukola said: “We had disagreement over his nonchalant attitude to my barrenness that day and we were fighting. Our neighbours tried to plead with him but he never listened to them. He later ran inside and destroyed all my property. But he had forgotten that we have petrol inside and when he was about lighting his cigarette, the keg that contains the petrol exploded and my husband caught fire immediately”.

Abimbola who has burns all over his body with his manhood badly burnt is presently receiving treatment at Ekiti State University Teaching Hospital (EKSUTH), Ado-Ekiti where doctors are battling to save his life.

Police spokesman said the woman would be charged to court as soon as possible.
Posted by Chimah Ikechukwu at 7:49 AM